“I know, Mom. I can’t wait. It will be a blast. Okay, okay, talk to you soon. I love you too Mom. Bye.” Ben hung up the phone with a smile and shook his head. His parents 25th anniversary was coming up and his sisters were throwing a big party. His mom had called him every day to remind him. “Like I would forget”, Ben thought to himself with a grin. Ben wanted to get his parents an amazing gift especially since his sisters wouldn’t let him help with the party, the party they were calling their gift! “No Ben, we don’t need you”, his older sister Amanda had said. “Yeah, Ben”, his little sister Susanna had chimed in, “We have got this covered.” Since they wouldn’t let him help, Ben decided to come up with a gift idea for your loved one that would knock the socks off his parents and wipe the smirk off his sister’s faces!

Ben sat down at his desk and fired up his laptop. He logged onto his search engine and began looking at gifts. There were a lot of options on the world wide web but none of them seemed quite good enough. This was his parent’s anniversary after all! They had always been there for Ben and truly were the example of what a good marriage looked like. Ben hoped to have a marriage like theirs someday.

A nice Gift idea for your Loved one 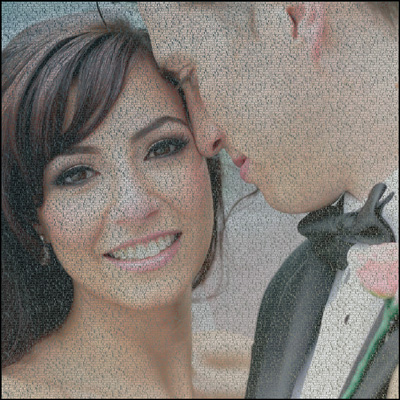 Ben landed on a webpage. “Photo to Text?”, Ben thought to himself. He was intrigued and sat down to read more. This website offered beautiful artwork made up of a photographof your choosing and words of your choosing. This sounded pretty wonderful to Ben and he was sure his sister had never heard of it. Ben decided that this was the gift for his parent’s big day. He sat down and started thinking about what picture and words he would choose.

He had some really good pictures of his parents throughout the years. His mom had a great smile and you could always see the love between them in any photograph. Maybe a family picture would work? He tried to think about what picture his mom and dad would love the most. Then Ben remembered how his mom had mentioned that she wishes they had a bigger wedding picture hanging up. When they were first married they couldn’t afford to get a big picture and then as the years went by it always seemed that something else needed attention first. A few years ago, a bunch of old family photos had been digitalized and Ben knew that he had that picture on his computer.

Choose your own words

Ben breathed a sigh of relief. That part was figured out now what about the words? He thought about and reconsidered many ideas. Should he do their names and wedding date? Maybe, he could pick some words that describe his parents and use those. Then inspiration hit. Ben decided to write a letter to his parents. The letter would include all of the things Ben wanted to thank the pair for, what he had learned from them thus far and what they meant to him. Ben grinned to himself. It was perfect! He placed his order confident that he had made the right choice!

The day of the party dawned clear and bright. Ben woke up early. He wanted plenty of time to get ready and wrap the gift and after that, dressed in his best suit with a nice red shirt and stone grey tie. Then, he wrapped the gift in blush pink and a soft grey, he knew those had been his parent’s wedding colors. He placed the best gift idea for your loved ones on the front seat of his car and took off to the big party.

Get your Great Gift Idea

Ben walked into the reception hall and sat he canvas down on the gift table. He walked over to the guests of honor and kissed his mother and gave his father a warm hug. They were happy to see Ben and seemed to be immensely enjoying their party. When it came time for gifts, Ben’s sisters stood up and gave a toast. Then, it was Ben’s turn to present his gift. He handed it to his parents and watched them open up the package.

The moment his mother saw the picture tears filled her eyes. She held it out to admire the canvas and her larger wedding picture that she had always wanted. Then Ben said “Mom, Dad hold it close to you and see what happens”. He watched their eyes fill with curiosity and then fill with adoration as they realized there was text behind that picture. A love letter from a grateful son to his parents.

If you are looking for a gift idea for your loved ones, consider a photo-to-text mounted print. When the picture is hanging on the wall you see the image and as you walk towards it the picture comes into focus. It is literally your picture in words! Start creating your one of a kind gift today!