A photo to text captures much more than a memory, it stops time and captures the meaning of that memory. Words are more than words. When we speak them, or sing them, they are the means by which we communicate. Although we communicate with our eyes, expression or touch; words are what we live by. So, why not capture those words into the moment a photograph was taken and create a photo to text?

There is no reason not to use words to re-create your moments caught on film. That text is the essence of what draws the emotions into the image. A photo to text is the past that will carry on, continuously into the future. Whether it’s a song, a love story, vows or special promises, that text is used to create the everlasting photo. The moment will never be lost. 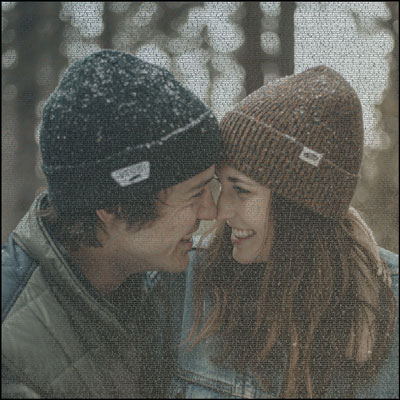 Imagine the image of a beautiful baby sleeping peacefully. Someone manages to capture the photo of her head rested on her mother’s chest while she sings to her, softly. Years later, that image is hanging on the wall. A little, long haired girl looks up at it and say’s, “Mom, is that me? What were you saying?” You tug at your memory, thinking back, trying to recall what that was. What were you saying? You slightly remember a lullaby that you used to sing to your daughter, but it’s cloudy now that it’s years later.

A Photo from Text

Let’s now fast-forward to another moment of a woman lying on a bed, with her son asleep, curled up in her arms. As she looks down at him, you can tell she’s saying something to him while she softly smiles. On the wall next to the bed hangs a picture of her with her mother. As she looks up at the wall, she sees the text embedded in this heartfelt moment and she begins to hum the lullaby her mother sang to her so long ago. This photo made from text has stayed close to her throughout the years.

When she looks at it, she looks into it and the words float out of her image, the words of the lullaby that her mom sang to her so long ago. Since the moment is held together by the words of her lullaby, it will carry on to her son who will also sing this song to his child and his child to the next. Every time he looks at it, he’ll remember when his mother sang it to him.

Convert a Photo into Text

A photo created by text can also be exciting! Think of the day you took your dog to the beach. Somehow, you managed to take a series of pictures of him just as a wave came over his head. When he came running out and while he was wagging his tail and running back into the water. You captured his essence while he was most alive. Now, look into the photo collage you created, putting these pictures together into one.

This is another perfect opportunity to convert a photo to text to help remember him when he is gone. What would the text be? Choose words that remind you of your favorite things about him. Use the special moments like how you found him, what his favorite toys are, what kind of trouble he got into and what antics he did that made everyone laugh, or everyone claim how cute he is. This photo to text will draw people in for more than a moment, the text will flow out of the picture and remind you of what made him so special, even after he’s gone.

Pic Made from Text

You don’t have to stop time to remember the special moments. You can capture them with a photo made from text. Use your memories; use your words to accompany the moments that are worth hanging on your walls or sitting next to your bed. A photo to text will flow from an image like a tiny dancer just waiting to capture your attention and draw you into to the story that creates that picture. Document your love story, remember the lullaby your mother used to sing.

Laugh at the time your dog played in the waves and shed a tear for the memories of those who made such a difference in your life. Whether they are your words or words of another, a photo to text will keep that special memory alive to never be forgotten, as long as the picture still stands.

The Best Way To Celebrate Your Anniversary: Turn Words Into Pictures
07/12/2022

Turn your birthday photo into your favourite song lyrics.
21/11/2022