Gift giving can be a literal nightmare for some people because they are busy or because they are afraid of offending someone. Or because they just do not have the money to spare. All of these things are magnified if you don’t know the person very well. So you do not know their interests or even how they will respond to a gift. Here we will show you unique gifts, because these pictures are made with text.

Pictures are Made With Text

On the other hand, if you know the person well enough to know that every gift so far has been an utter failure, you may be reluctant to buy anything at all. Pictures made with text are a good choice for people you know as well as for people that you barely know. 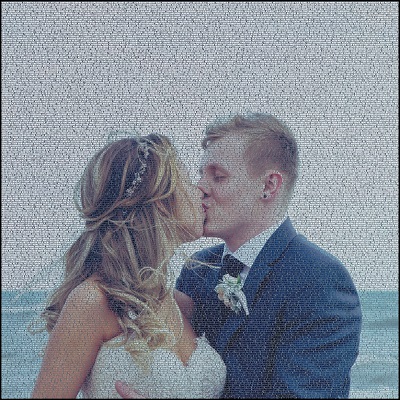 Phil was getting ready to retire from his company after more than three decades. During that time, many people had been hired, fired, promoted and moved on and so on. Phil himself had started at the lowest rung and worked his way up to middle management where he settled in comfortably. A friendly but quiet guy, he didn’t really fit in socially with the people who worked in the company now.

The younger crowd were all active and always doing things. They were polite and always asked if he would like to come along but it was always too much for Phil. Some of the older guys in the company also asked if he would like to join them for golf and other things but that didn’t interest him either. He liked to do his work, go home and relax. He was counting down the moments until his last day.

Image Made from Text

Several people were in charge of Phil’s retirement party. Janine, the elected person to choose the gift was having a rough time. Phil didn’t really talk a lot about what he liked to do outside of work beyond mentioning that he had prize orchids. And that he raised finches. After a lot of searches, Janine found a website where she could create a unique and interesting gift for Phil’s retirement party.

This would be a picture made of words creation. Not only did she love the idea she loved how many options there would be for this gift. It would be something that would allow Phil to remember his time at the company. And the people he had worked with but not something that would embarrass him like a tacky watch.

She was amazed at how easy it was to create this gift once she got started. All that she had to do was find the right picture and then add the words on a simple and easy to follow form. And the site created a image made from text. It was framed, wrapped and ready for the party. Only she knew what the final gift looked like and she couldn’t wait to see how Phil and everyone reacted.

Picture Made with Texts

On the day of the retirement party, Phil was brought in to the room on a sea of applause and smiles. He pointed at the cake and the lovely floral arrangement and seemed quite pleased. Several people spoke about Phil and his tenure with the company. Phil himself was brought on stage to say a few words and he did. Shocked by how deeply touched that he was. It was at this moment that Janine gave him the gift that they had all purchased together. Everyone gathered around to see the final work.

We make all these pictures with text. So Janine had chosen was a candid shot of Phil speaking to a group of younger employees. You could see the care that he was putting in his words. And how intently they were all listening to him. It was the perfect picture of a man who was kind, caring and dedicated to his job. The words that made up this photo included “inspiring” “legacy” and “kindness”. He stared at this lovely gift for a very long time and managed to choke out thank you but nothing else. Looking around, there wasn’t a dry eye in the room.

Not everyone gets to work with a Phil which is a shame because the world could use more of him. No matter what the occasion, images made from text are the perfect way to let someone know how you feel about them. It can be part of a gift or the entire gift. You don’t have to spend thousands of dollars to let someone know that they are worth the whole world to you.