Do you remember those times as a child when your father said that he would always be there for you? When he promised that he’d come back, no matter what he had to do to get back at all? You remember all those times when your father let you know that he was going out to serve your country. But he’d be back as soon as he could just so he could wrap his arms around you once more? What about a photograph with words to remember all these moments?

What about those times where you wished he was there at night to tuck you in? Or those times that you wished he were around for your senior prom, and you walked down the carpeted staircases in the house, a part of you was a bit hurt that only your mother was at the foot of the steps to watch you get ready for one of the most important times in your life?

How about when you graduated from high school just a few short weeks later, and while you didn’t want to be selfish and wish for your dad to be there while he was out serving your country, you still felt inside that you would’ve much rather had your dad there for your special day? How about all those birthdays that went by without your father present, and while you understood, deep down, you missed him more and more each time he missed a special event in your life because you just wanted to spend time with him and have him know the person you were becoming? 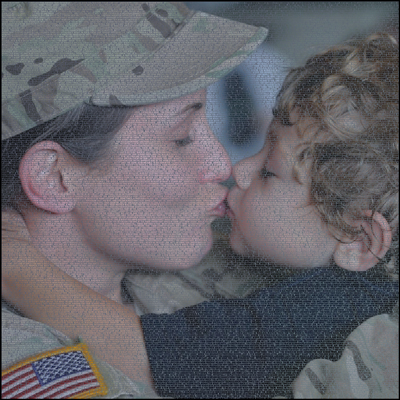 Your father is a part of the Armed Forces, and it is his selected duty to ensure that your country is safe, but it will never be an easy job. He’ll be gone for long periods of time, potentially deployed overseas or stationed somewhere on the opposite side of the world from you. Maybe he never left, but instead, you go with him from state to state, county to county, country to country, feeling like a nomad in your own life as you consistently pick up and move, living on a base.

You could always write your father or send him messages from your phone or even Skype. But it’s not the same as being able to see him in the flesh standing there in front of you. Armed Forces serve a very important part in the world that we live in. And your love and respect for him is deep and noteworthy. You would love for him to truly know how much he means to you. And how much you appreciate what he does.

It may not, but what if you could add the text to let him know that? What if you could give him your photograph with all the right words sprawled across the image? Now, you can, with photo-to-text, where you can easily upload an image to the website, and you can then write all the proper words for your father to read.

Luckily, the gift will arrive easy to hang right out of the box. And it’ll be easy to store for all those different times that your dad may need to move or migrate to a different country.

Your father has one of the most important jobs in the world. And while sometimes you struggle to understand that, you’ve never once taken his duty for granted. That’s why it’s time to show how much you appreciate him. In the end, while you minded in the moment that your dad missed some pretty special moments in your life. You never once wanted him to give up his dream just so he could be there. You loved him for him, and if his passion was to be apart of the Armed Forces, then you wanted to support that too.

This Armed Forces Day, give the person in your life the gift that really does say it all. Have you missed them, but you respect what they do? Give them a photograph with words printed on a personalized canvas. Are you incredibly proud of what they do every single day for your country? Tell them with a photograph made of the personally written text that you developed yourself on the website. Are you proud to be their child? Make sure they know all about that with an image of the two of you in another country. Hugging and smiling, and letting them know how much you appreciate their presence in your life at all.

While they’re away, both of you can look at the photo and be able to share it easily via social media. All of your friends and family will be able to see how special the bond is between you two. No matter what country or state lines are in between.

Happy Armed Forces Day. Make sure they know you care with your father’s picture turned into text.